In America, dating is something that happens out in the open. If I meet a nice boy and plan to go on a date with him, that's something that I can tell my mother. If I'm out in public and someone sees me alone with a man, it's not something that anyone would find surprising. Most people date lots of other people before they settle down with a partner. We have a lot of steps that we go through before it's like, here it is, this is my partner of choice, I am done now. First you date someone, then your family knows about them, then your family meets them ... blah blah blah you live together, get married, have babies. But it's a long process.

From my perspective, dating in Vanuatu is so, so, so, so, so secretive. It's like the most secret thing in the world, and it's much higher stakes here than in America. I think it's because in Vanuatu, the first few steps take place in total secret, so that by the time two people are seen spending time together in public, it's already much further advanced than just a first date.

When a female PCV is seen alone with a male PCV, especially when one is sleeping at the other's house, it is assumed that they are having sex. (In a great story, a male PCV I know had three female PCVs staying at his house for the weekend. A friend of his asked him how sex worked since he was obviously sleeping with the three of them at the same time!) This is irritating because, when two PCVs are just friends, they can sound like broken records saying--this is not my boyfriend, this is not my girlfriend, we are not friending, she is like a sister to me--but a lot of people will think--yeah, yeah, yeah, keep pretending. When two PCVs are dating, it's actually OK for them to hang out and spend time together, but people will assume their relationship is more serious than it actually might be. For example, I know one volunteer whose host family assumes that she is absolutely 100% going to marry her boyfriend the second that she finishes Peace Corps. And they're not engaged yet, so it is jumping the gun. But obviously, she and her boyfriend have their own understanding of the relationship, which is in line with American cultural norms.

When PCVs date Ni-Vanuatu, it's a lot more complicated. Most PCVs with Ni-Vanuatu boyfriends or girlfriends try to do what's called 'friend hide', or basically, have a secret relationship. The upside to friend hiding is limited but very real: you can hope for less drama with the village or the neighbors. As volunteers we do get a lot of encouragement to get married to someone from Vanuatu, but I would say that actually dating someone--dating, not being ready to marry them--isn't really seen as proper behavior. It's like, if you like them, why aren't you serious about them? I know a lot of friends who have dated Ni-Vanuatu, and while many of their friends and families knew about the relationship, it's hard to think of any who spoke about it openly. The downside to friend hiding is pretty serious, though. You basically can't go anywhere in public together, they can't be over at your house really unless it's night time, you can't talk about them with your friends ... That's not a lot of fun.

Posted by Amanda Russell at 8:06 PM No comments:

A church in Holamb, Malekula 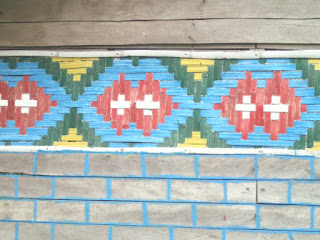 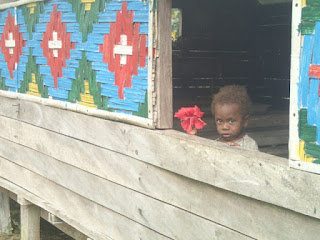 Posted by Amanda Russell at 2:49 PM No comments:

Yesterday, my friend Laura handed me this tiny little puppy. I've been wanting a new dog ever since Camille ran away/was stolen.

The new puppy was definitely not feeling it, and tried to run away twice that afternoon. I tied a leash up for her and gave her some tin meat and let her sit outside.

Less than six hours later ... the dog ran away!! I think this goes to show that Peace Corps puppies and I might not be meant to be together. Sori.
Posted by Amanda Russell at 2:43 PM No comments: 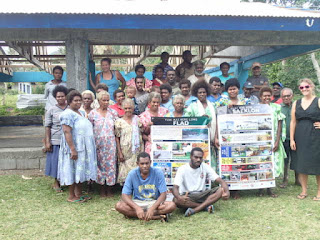 I went to Paama a while back. Really, really nice place. We did a joint disability/disaster program with TVET and the Malampa Disaster Committee. Went to Lulep, Vaoleli, Vutekai, and Tahi, but unfortunately I connected my camera to a virus-infected computer and all of my photos disappeared.

Hi! I'm Amanda Russell. I graduated from Carnegie Mellon in May 2012. In October 2012, I joined the Peace Corps and moved to Vanuatu. It's been pretty all right--still here.

I started my Peace Corps service in October 2012. From December 2012 to October 2014, I was based on Tongariki Island in the Shepherds group, working as a literacy volunteer at Coconak Primary School. Beginning October 2014, I am working at Malampa Disaster Management Office and living on the (comparatively gargantuan) island of Malekula.

All of this nonsense is my own and does not reflect the views of Peace Corps or the US government.