And I get to wear flip flops everyday 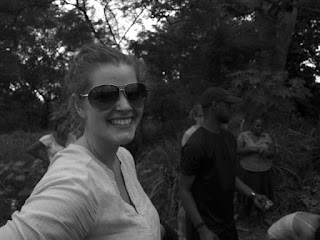 Posted by Amanda Russell at 9:46 PM No comments:

I got into Vanuatu four days ago! I'm currently in the resource room of the Peace Corps office, but I don't have a lot of time to make an update since I have to run really quick. Hopefully I'll be able to put up a better set of posts in a few weeks ... months?

I'm currently in Pango Village at IDS Bible Camp, maybe like 20-25 minutes outside of the capital. On Sunday, I'll be moving to a village on the northeast part of Efaté Island, where I'll be until about December 6th (swearing in.) No internet, not sure about power ... This is looking very fun, and also like I'm not going to be able to easily keep this updated. (Still, thanks mom! I'll send you a letter as soon as I can!) I just bought a couple of things at Au Bon Marché (like a miniature Target) and a nice bush knife to go crack open coconuts and kill things with. I think that this is going to end up a lot of fun--I'll give you a better heads up when I can!
Posted by Amanda Russell at 9:12 PM No comments:

Hi! I'm Amanda Russell. I graduated from Carnegie Mellon in May 2012. In October 2012, I joined the Peace Corps and moved to Vanuatu. It's been pretty all right--still here.

I started my Peace Corps service in October 2012. From December 2012 to October 2014, I was based on Tongariki Island in the Shepherds group, working as a literacy volunteer at Coconak Primary School. Beginning October 2014, I am working at Malampa Disaster Management Office and living on the (comparatively gargantuan) island of Malekula.

All of this nonsense is my own and does not reflect the views of Peace Corps or the US government.